Historically, Richard J. Oglesby is recognized as Decatur’s most distinguished citizen. He served his country well as a U.S. Senator, a Civil War Union general, and a three-time Governor of Illinois.

1824
Born in Oldham County, Kentucky. Orphaned at age eight when his parents died of cholera. Lived with relatives.

1836
At the age of twelve, he moved to Illinois to live with an aunt and uncle on a farm on the banks of the Sangamon River west of Decatur. He worked as an apprentice carpenter and as a farmer raising hemp and other crops.

1844
Went to Springfield and studied law with the highly respected Judge Silas Robbins, was admitted to the bar and practiced law briefly in Sullivan.

1846-1847
With the outbreak of the Mexican-American War, he enlisted as a 1st Lieutenant in Company C, 4th Illinois Infantry Regiment fighting in the battles of Cerro Gordo and Vera Cruz where his regiment almost captured Mexican President General Santa Anna, but they had to settle for his cork leg, carriage and $20,000 in gold.

1849
In the company of eight men, he journeyed from St. Joseph, Missouri to Sacramento, California driving a six-mule team 1,940 miles overland, a trip that lasted ninety-five days. He mined gold for two years and ran a store, returning to Decatur in 1851 with $5,400 in gold and then speculated in real estate until he became one of the city’s wealthiest young men.

1856-1857
To further his education, he went to Europe and the Middle East traveling through Scotland, Ireland, England, France, Prussia, and Russia. While in Prussia he hunted boar with the King and he was in Moscow at the time of the coronation of Czar Alexander II. Continuing to Alexandria, Egypt he traveled 600 miles up the Nile River to Thebes, rode a camel across the Arabian Desert to the Holy Land where he climbed Mt. Sinai, returning to America through Greece, Italy, France, and England. The journey lasted 20 months. He used his travel experiences to polish oratorical skills by giving travel talks to the citizens of Decatur at the old Powers Hall. 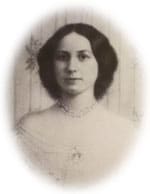 1859
Oglesby married Anna White of Decatur. Four children were born: Richard, Elizabeth, Robert, and Olive. The two oldest died in childhood. Anna died in the Governor’s Mansion in 1868 in Springfield during Oglesby’s first term in office.

1860
He was elected to the Illinois Senate, his first public office. At the Illinois State Republican Convention held at the Wigwam in Decatur in 1860, demonstrations organized by Oglesby were considered to be the main impetus that gave Lincoln the nomination for the presidency using the slogan “Abraham Lincoln-The Rail Splitter Candidate.” The following week at the National Republican Convention held in Chicago the demonstration was repeated, and Oglesby nominated Lincoln for the Republican candidate for President. 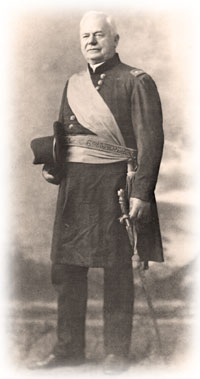 1861-1864
With the outbreak of the Civil War, he resigned his State Senate seat to accept a commission as a Colonel commanding the 8th Illinois Volunteer Regiment. He marched his Decatur Regiment to Cairo, Illinois for training where he met General U.S. Grant. They became close friends, a friendship that continued for the rest of their lives. For his gallantry at the battle of Fort Donelson, the first substantial victory, Lincoln promoted Oglesby to the rank of Brigadier General. He participated in several major battles and was critically wounded in the battle of Corinth, Mississippi. Suffering from his wounds, he asked to resign, but Lincoln posted him to Washington as a judge advocate presiding over the court-martial of the Surgeon General.

1865
President Lincoln encouraged Oglesby to return to Illinois to be the Republican candidate for governor. As a result of his election to office, Illinois was the first state to ratify the 13th Amendment to the U.S. Constitution outlawing slavery. The afternoon of April 14, 1865, the Governor arrived at the White House for a meeting with his old friend. He declined the invitation to go to the Ford’s Theatre with Lincoln that evening and was later notified that the President had been shot. He was with Lincoln when he died. He accompanied Lincoln’s body back to Springfield where he was elected as president of the association to raise funds for and design the tomb where Lincoln is buried. Oglesby completed his first term as Governor with admirable skill and ability in 1869. 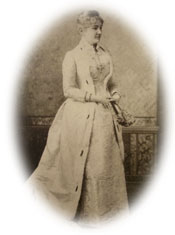 1872
He was elected governor a second time serving only eight days when he was chosen by the Illinois Legislature to serve a full term of six years in the U.S. Senate, retiring in 1879. In 1874 Lincoln’s tomb was dedicated, Oglesby giving the main address with President Grant and the Cabinet in attendance.

1873
Oglesby married a young widow, Emma Gillett Keays, who came to the marriage with a son, Hiram Keays. She was the daughter of John Dean Gillett, an extensive landowner, and cattle baron. They had four children: Felicity, Richard, John, and Jasper. As their family increased, they built a new house joined to the one they were living in on West William. The original architect was William Le Baron Jenny of Chicago, who later became known as the father of the modern skyscraper. They lived in Decatur until 1882.

1882
The family moved to Lincoln where they lived while their home, Oglehurst, was being built in Elkhart, Illinois.

1885
Elected to his third term as governor, 20 years after being elected to his first term, serving until 1889 when he retired from political life. One of the most notable events during his last term was the Haymarket Riot in Chicago. He died on April 24, 1899, at the age of 75. Shortly before his death, he wrote a friend, “We kept things in pretty good order for fifty years, now let the world take care of itself.”

1899
Governor Oglesby died and was buried in Elkhart Cemetery.